Try our technology online without installation - clipboard, drag and drop and crop supported

Summary: Textract screen scraper SDK can feed a program you develop with the text data from an existing application. It works even if this application does not support any communication API. Textract captures image directly from the screen and converts it to text. Textract has OCX and DLL interfaces and console mode EXE. Windows versions from XP to 10 are supported. Free 40 day trial. Released in 1999. Many corporations use Textract in their redistributable software, most of them in the USA.

Recurring Problem: existing/legacy application can not export data to other programs and can not be changed.

Example 2. Medical: need to read data from the existing HIS (Hospital Information System) software. HIS display patient data like ID and name on the screen. Typical HIS application will not be able to export data in a form readily accessible by the other program.

Example 3. Quality Assurance in Software Development: new application displays text on the screen. A test program reads displayed text and its exact location without interaction with the new application. It compares this text with expected results. The only clean way is to capture the image from the screen. But this image is a bitmap, not a text.

Idea and Solution: capture screen image and pass it to the OCR engine that transforms bitmap from pixels into actual text. Textract screen scraper SDK is specifically designed to recognize texts printed on the screen by the Windows graphics system.

DLL: best suitable for C/C++, hardcore and legacy environments, and for languages that is hard to interact through OCX

Console mode EXE: best suitable for perl and other scripting, and to make fast experiments with the screen scraper. 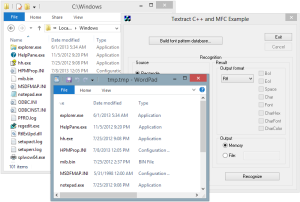